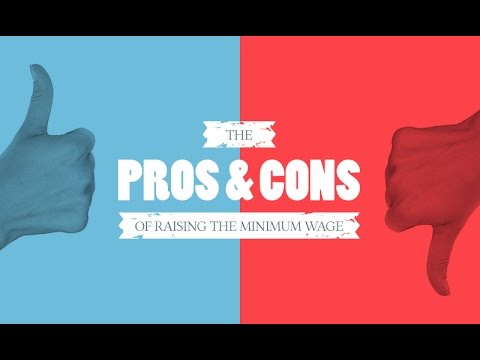 Pros and Cons of Raising the Minimum Wage

The minimum wage debate has been around for a while, but progressives have been pushing the idea of increasing the federal minimum wage from $7.25 to upwards of $15 much more recently. They actually passed a bill (H.R. 1) with a wage increase included through the House but were stopped by several moderate Senate Democrats when it was up for the final vote. Although this is a heavily debated topic, there is definitely an abundance of researched conclusions that predict what could happen if the minimum wage does get increased. I’ll go through some major Pros and Cons:

It would stimulate the economy

With more people having more money to spend, the economy would grow. Financial experts estimate that just an increase to $10 an hour would put $22 Billion into the economy, and create 85,000 jobs over 3 years.

It would reduce the number of people living in poverty

This one is simple, with the addition of a more liveable wage, more U.S. residents would be able to rise above the poverty line.

It would reduce Government Welfare Spending

When raising the minimum wage to just $10 an hour, the government would spend 4.6 Billion less on food stamps. Many private companies can easily afford to pay their workers these higher wages, and so it is a way of giving back some of the big corporation’s wealth to the people.

The minimum wage has not kept up with inflation

The minimum wage simply has not kept up with the inflation of the cost of living in most areas, which forces more people into poverty

This is an unavoidable aspect of increasing the minimum wage. Some company’s current business models can not support the increase of pay and 38% of employers who currently pay minimum wage said they would lay off some employees if the minimum wage was raised to $10.

A minimum wage increase could hurt some businesses and force companies to close.

Raising the minimum wage would increase the price of consumer goods

A 2015 Purdue University study found that raising the wage of fast-food restaurant employees to $15 or $22 per hour would result in a price increase of 4.3% and 25% respectively, or a reduction in product size between 12% and 70%: “a hamburger would be much smaller,” the researchers stated.

Obviously, there are very reasonable pros and cons to raising the minimum wage, but I personally resonate with the pros more. From my research, the groups that would hurt the most from an increase to the minimum wage would be companies rather than people. I’m a fan of siding with the people on matters of wealth distribution, and being someone from a state where the minimum wage is $7.25 an hour, I feel the pain of how little that really is. Of course, I feel for the small businesses that will have to make tough decisions, but for the good of the country, I think we need to raise the minimum wage.