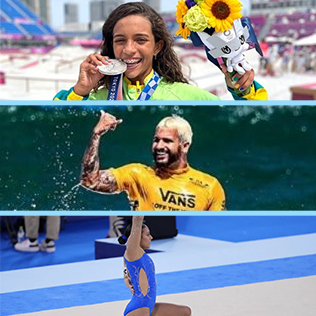 Highlights From the Tokyo Olympics 2020

With this year’s Olympics, there have been so many ups and downs surrounding it. With the rise of COVID cases presenting within the team and staff to the controversial (and uhm, racist) guidelines made for some of the athletes, the Olympics has been filled with both love and hate moments for many of us. While we know so many flaws already exist within the Olympics, let’s not forget about the trailblazers of color paving the way for our spots as athletes of color in the Olympics. Here are some, just to name a few…

Meet the youngest person to win an Olympic gold medal. Rayssa Leal, age 7, won the Olympic gold medal for skateboarding this week and is breaking headlines as not only the YOUNGEST to win it, but also because she pulled it all off with swag. Leal went viral in 2015 for doing some incredible moves, on Vine, while dressed in a dainty Disney princess dress, and now she came back stronger than ever winning home the silver medal [1]. She is not only the youngest to bring home the gold, but also the second Brazilian Latina to bring home a silver medal while representing her country!

Meet Brazil’s best surfer to win the first Olympic gold medal in surfing. Italo Ferreira, the son of a fisherman from a small town, is self-taught from a small town in Brazil. He taught himself to surf using a styrofoam lid from a cooler that his dad would use to fish [2]. Now he became the first of two to win the first-ever gold medals for surfing in the Olympics, and the ONLY Latino so far to win a gold medal in this new Olympic sport.

Meet Costa Rican gymnast, Lucian Alvarado, making headlines for several reasons in this year’s Olympics. Alvarado has created an Olympic first Costa Rican gymnast to represent her country in this division of the Olympics. Not only is she the first Costa Rican Latina to make it to the gymnastic Olympics, but she has also been praised for a bold statement she made at last week’s tournaments. During her performance, she took on the opportunity to show support for the Black Liberations Movement (BLM) by kneeling down and putting her fist up at the end of her floor performance [3]. This 18-year-old Latina is showing beauty, grace, and resistance all throughout her stay in the Olympics!

In other news, Latin America and the Caribbean are definitely in this year’s Olympics in so many ways. Keep tuning in to the Olympics to see what other podersos@s are paving the way for the Latine community this year.