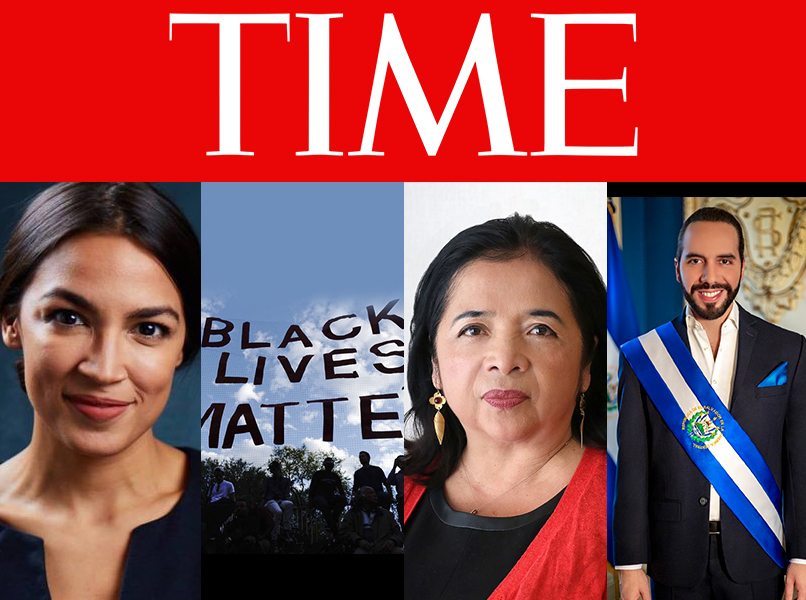 It’s that time of the year again. Gifts, cookies, snowmen oh my! Every December, TIME names a person (or people) who wielded the most influence in the previous 12 months. This year’s candidates were Joe Biden and Kamala Harris, Donald Trump, health care workers and Dr. Anthony Fauci, and the Racial Justice Movement. Tradition upheld this year as Joe Biden wins TIME’s person of the year as President-elect’s have been in the past, however, he is the first president-elect to win the award with his vice president-elect. TIME selected the duo for their roles in “changing the American story, for showing that the forces of empathy are greater than the furies of division, for sharing a vision of healing in a grieving world.” as CEO Edward Felsenthal explains. Despite the hopes of our new elected officials and their previous successes this year, there are plenty of strong candidates that went unmentioned this year.

AOC has changed the game this year with her past political wins for progressive change, and her socialist views have continued to inspire younger demographics of the United States. As the youngest woman to be elected to Congress, AOC has not only influenced the woman of our country but many new voters as well. Gender inequality has taken a toll on our country and its female citizens for centuries and seeing an ambitious young female in power moves this country one step closer to the equality we long for. On another hand, her age intrigues young voters to support their hopes for our future with the voice of our generation. Too often is the United States being represented by our stereotypes of older white men. AOC’s position in Congress breaks boundaries as the relevance in her voice and experiences can be used for decades to come while our country develops. She inspires the younger demographic to vote for a voice that represents one similar to their own, and to face challenges with confidence as she has done by running for office as early as age 29 and making a positive name for herself without corporate funding. Lastly, her heritage incorporates new viewpoints that have gone unheard for far too long. Her position in power allows her to share her Latina background with the country and promote unique points of view to support positive change for others outside of the US’s stereotypical white male leaders. She represents the working class, democratic socialist beliefs, and the Latino community as a boss woman and congresswoman of the United States.

The fallen of BLM movement

It’s no secret that the BLM movement has turned new pages around the world. But what inspired its rebirth? The fallen of the BLM movement deserve recognition for their history-breaking awakening and changing history around the world. The unfortunate and premature deaths of George Floyd, Breonna Taylor, Ahmaud Arbery, and countless others have changed history from beyond. Their sorrowful passings have made an impact that their loved ones may be proud of, BLM supporters are inspired by, and the government should dwell on. The recognition will never be enough to void the pains of their passings, however, the results are significant as the unity of the BLM protesters have made waves throughout the world, educated thousands on their rights to protest and their awareness of people of color’s hardships. This allows the fallen to rest in power as their names make history and will someday add to a high school history lesson, national monument, and any other recognition the world may allow. They have inspired the change that too many have forgotten about since their lessons about MLK Jr. These reminders are critical in the fight for racial justice and have made an eye-opening impact on the world while we unite and learn more about what we’ve lacked to recognize for decades.

While all essential workers deserve an extra pat on the back this year, medical leader, Bonnie Castillo has turned tables for her fellow nurses. Castillo is the executive director of National Nurses United and The California Nurses Association, and one of the first to acknowledge the shortage of personal protective equipment available to health care providers during the pandemic. Nurse Castillo fought against layoffs and pay cuts to support labor movements and unions during a traumatizing period within their careers. Her commitment represents an honorable democratic society that works to heal society, rather than solely a virus. Health care workers around the world and Dr. Fauci have worked endlessly to better society and heal the virus and its victims, but leaders within the industry deserve recognition for their life-altering dedication to the world and their colleagues. Bonnie Castillo would have been a strong candidate for the award because she takes her career to new levels by not only fighting for her patients but by also supporting the workers within her field to create a society where we can support each other and sympathize with one another’s downfalls during these uncertain times.

When we asked our Instagram followers who their first choice for the award would have been, President Bukele of El Salvador was nominated. This Salvadoran politician is the 46th and current president of the country. He became the first president of the century to win his presidency from a minority political party campaign since José Napoleón Duarte (1984–1989). El Salvador’s main political parties are the Frente Farabundo Martí para la Liberacion Nacional (FMLN) and the Alianza Republicana Nacionalista (ARENA). The FMLN is a leftist political party formed from the unity of other leftist parties during the country’s civil war in the 80s. They became a legal political party at the end of the war in 1992 for Salvadoran workers and peasants to fight for leftist viewpoints against the government and its national army. The ARENA was founded in 1981 and is the right-sided political party of the country. They define themselves as a political institution constituted to defend the democratic, republican, and representative system of government, the social market economy system, and nationalism. President Bukele represents the Gran Alianza por la Unidad Nacional (GANA) political party that is a conservative and center-right party in coalition with FMLN and has representation from previous ARENA supporters. Bukele ran his presidential campaign promising to modernize the Salvadoran government fundamentally and did so by holding a public inauguration ceremony. The current president began his fight against corruption for major change at the beginning of his term by relieving many corrupt political leaders of their duties to ensure that his support system would be complacent with his movement. This year, he has also improved national security by recruiting 3,000 additional soldiers to combat gangs and criminal activity throughout the country. During his term, Bukele has also established foreign relations with many new countries including Japan, Morocco, the EU, and reestablished its relations with the United States. Many of the countries citizens believe that he has accomplished more in six months of his term than his predecessors have in years. The accomplished Salvadoran President said that he would create positive change and is holding himself and his office true to it, which all political leaders should be inspired by.

There are an unimaginable amount of candidates worthy of TIME’s Person of the Year award and they all deserve to be recognized. This year has made history in multiple ways and we have survived! With the help of influential leaders around the world, we’ve opened new books and turned new pages around the world so that we can look forward to the future. Inspiration comes in all forms and leaders are born every day. May we continue to be inspired and influence the world in the best way possible throughout 2021, we pray!

PrevPreviousHow to Talk Politics During the Holidays
NextCOVID FrustrationNext