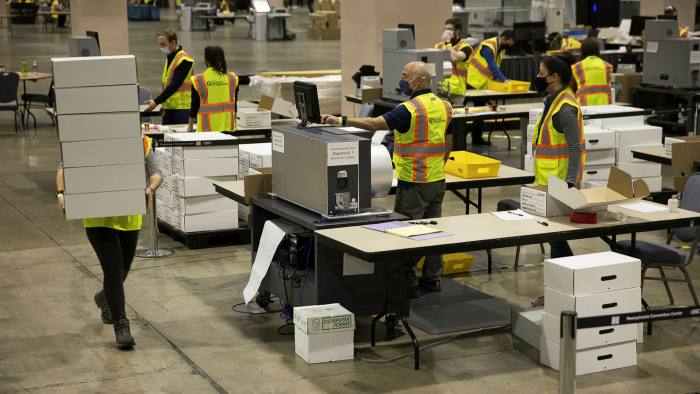 It’s no secret that Trump lost the election. The numbers aren’t particularly close. Biden leads Trump in the popular vote by over six million votes, a lead that will grow further as more left-leaning mail-in ballots, many of which come from blue states like Illinois and California, come in. And Biden’s big wins in Georgia, Pennsylvania, and Arizona mean that he will almost certainly beat Trump in the Electoral College count by a score of 306-232. Ironically, Biden will have the exact number of electoral votes that Trump had in 2016, a number that former Counselor to the President and Trump apologist Kellyanne Conway in a 2016 tweet called “Landslide. Blowout. Historic.” And yet, Trump thinks that he can challenge this wide margin through futile but costly lawsuits, and demands for recounts.

Trump has focused his attack on mail-in ballots, damaging our democracy and reputation. Mail-in ballots originated during the Civil War, and have remained a cornerstone in our democracy, allowing Americans abroad—soldiers, travelers, teachers, expats—to voice their opinion in the country’s most important elections. People mail in their ballots every year, and it remained no different this year. Trump’s calls to “Stop the Count” as he watched his leads shrink and felt his hopes dim was a slap in the face to all those who voted from abroad, or felt too unsafe to vote in person on Election Day. Their voices count too.

These attacks and lawsuits have become more and more pathetic, since it became clear a while ago that they have no basis, and no chance of success. Trump sycophants have grasped at straws since November 4th. For one, fact-checkers have easily debunked their widely circulated videos of voter fraud. One video taken off of a livestream that seemed to show election workers filling in votes for Joe Biden turned out to be ballot transcribers. Furthermore, election officials have described the painstaking processes that go into counting votes in a secure fashion. In Arizona for instance, all ballots remain behind locked doors with surveillance cameras and at least two people accompanying them of opposing political parties. Next, they go into tabulation, where both Democrat and Republican volunteers tally the ballots through machines checked for accuracy before and after the election; this process also includes a live feed. Finally, results go to a central vote location where election officials count the votes again. Clearly, those volunteers of both parties who involved themselves in the process of carrying forward our democracy took their jobs seriously and worked to exhaustion. They do not deserve the daily threats that have arisen during this election cycle, spurred on by the President’s baseless attacks.

In addition to attacking early votes—one Trump lawyer argued for the disqualification of a batch because they “smelled bad”—the Trump campaign has demanded recounts in key states, such as Pennsylvania, Arizona, and Georgia. This effort is futile, pathetic, and costs Americans money. Trump supporters quickly remind others of 2000’s election, where Florida, after a recount, gave the state to President Bush by just over 500 votes. Trump lost swing states that he needed to win by tens of thousands of votes. For example, in Georgia, Biden holds a lead of just under 15,000 votes as of November 17. This state has undergone a recount, and November 16, in an “amazing blunder,” election officials found a batch of uncounted ballots, netting Trump a gain of 800 votes in a Republican county. Similar findings need to happen hundreds more times all over the country for Trump to even dream of winning. It won’t happen.

What Trump needs to do now is concede and unite the country; he sort of did, in what I believe was a Freudian slip, when he started a tweet with “He won” earlier this week. Furthermore, will he condemn real attempts to suppress peoples’ votes, like Lindsey Graham pressuring Georgia’s Secretary of State to cast away thousands of ballots? I hope that the President will finally come to terms with reality so that we can begin healing our broken country.