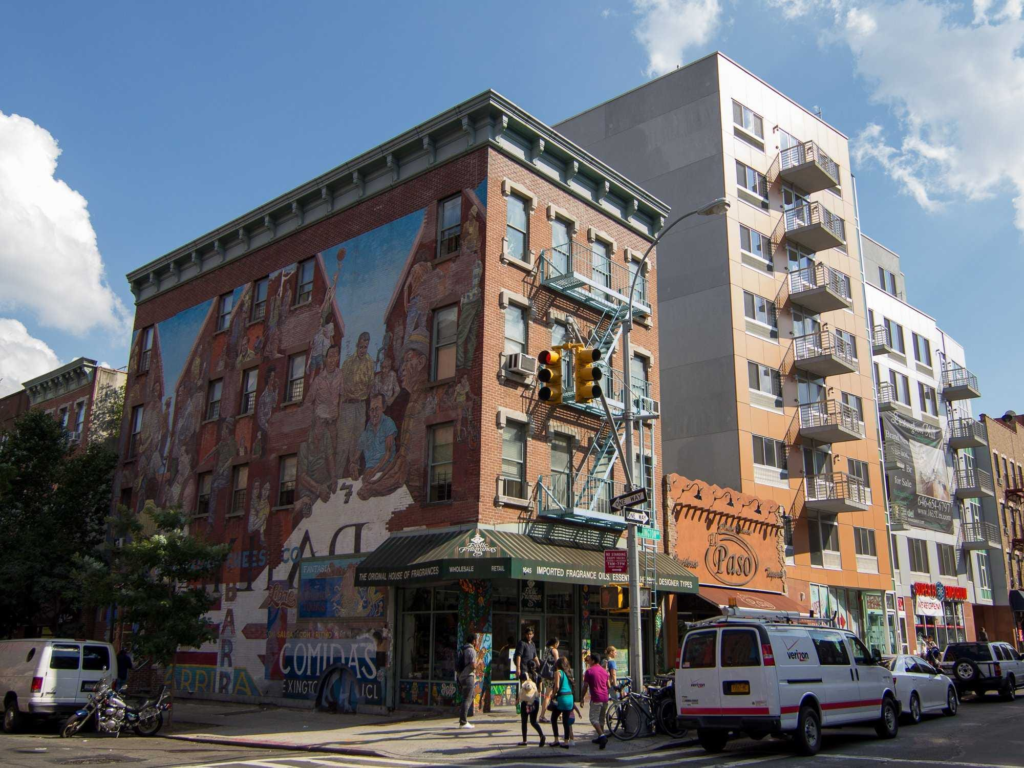 Uptown Manhattan has long been known as a familiar home for people of color that are left disregarded and marginalized outside of it. With the prominent culture that shines through uptown all around, it has become a marked territory for people of color to belong in this country. For the immigrants of color that live within it, Uptown NYC is a home away from home as much as it is a sanctuary for people of color who do not feel a sense of belonging in their cultures, just like me. Born and raised in Uptown’s Inwood neighborhood, this area not only grew me closer to my culture but also both sides of myself. As a Dominican-American, Inwood beautifully intertwined both sides of my identity and created a space where I felt I belonged and embraced both sides of me. Through a personal level, Inwood has become “a symbol, [that] although it has objective visible reality, always has behind it a hidden, profound and only partly intelligible meaning” (Cooper, 1974, p. 169). The neighborhood is a physical symbol of who we are as a community. Just as described through my visual poem, Inwood has fostered the beauty of Dominican culture through the “perreo and pastelitos that fill these blocks.” As a result, Inwood links me closer to my culture as much as it does for many others in the community, and for many of us, it is home.

While I have grown up seeing this neighborhood as my home, I have also grown up experiencing my home being stripped away from my community due to the detrimental effects of gentrification. Coined in the 1960’s, gentrification defines a process that changes the character of a neighborhood as more affluent, privileged people move into the neighborhood and displace the low-class and working-class, mainly people of color, that reside there. Gentrification did not start in Inwood specifically until early 2013 as many of the white neighboring-community in the area integrated into the community of color in Inwood. The growing white residents caused the land value to increase in the area. This is influenced by power and privilege, also known as the macro level. This level of the environmental system of Inwood’s gentrification demonstrates how power and privilege greatly influences the statehood of the community and its residents of color. Once white residents moved into much of Inwood’s places mostly of color, the areas began to change to cater to those new white residents. That means that businesses went from local to big brands, and housing went from “affordable” to modernized.

As a result, the macro influences of the community initiated the start of the gentrification in Inwood. Displayed through my visual poem, gentrification started to take up its many forms in Inwood from the development of expensive restaurants to the increase of modernized real estate developments. As Starbucks café’s began to develop in Inwood, many of its black and brown residents began to struggle to live there due to the rent rapidly increasing. Combined with the rapid increase of rent in the area and new policing laws first implemented in the area as well, Inwood was becoming very high-risk of being fully gentrified.

Inwood “turned into colonized targets prepared to be under attack” once rezoning laws commenced. This was greatly powered by the destructive forces of the exo (politics and laws) influences in the community. At the start of 2015, Mayor De Blasio’s rezoning plan, The Inwood NYC Planning Initiative, became the new and improved form of gentrification in the area. Samuel Stein defines this new-wave of gentrification as, “the process by which capital is reinvested in urban neighborhoods, and poorer residents and their cultural products are displaced and replaced by richer people and their preferred aesthetics and amenities” (2019, p. 41).

While Mayor De Blasio’s plan became unsuccessful the first time around, it keeps being an issue even six years later. As coalitions for housing rights advocate, “Mayor de Blasio has missed the opportunity to engage Washington Heights and Inwood residents in creating a rezoning plan that could benefit our community. Instead, he has chosen a massive up-zoning of Inwood that will result in gentrification and displacement of our majority Latinx community and immigrant-owned small businesses” (Gonzalez, 2019, p. 28). Even as many housing advocates fight against rezoning and real estate plans in the area, Inwood faces being yet again at high-risk of rezoning and still possibly advancing in more gentrification in the area

Tell us what your thoughts are on this change. Is It for better or for worse?

PrevPreviousHow I Got Into Politics: A Community Lover’s Passion for Organizing
NextRanked Choice Voting (RCV), explained.Next