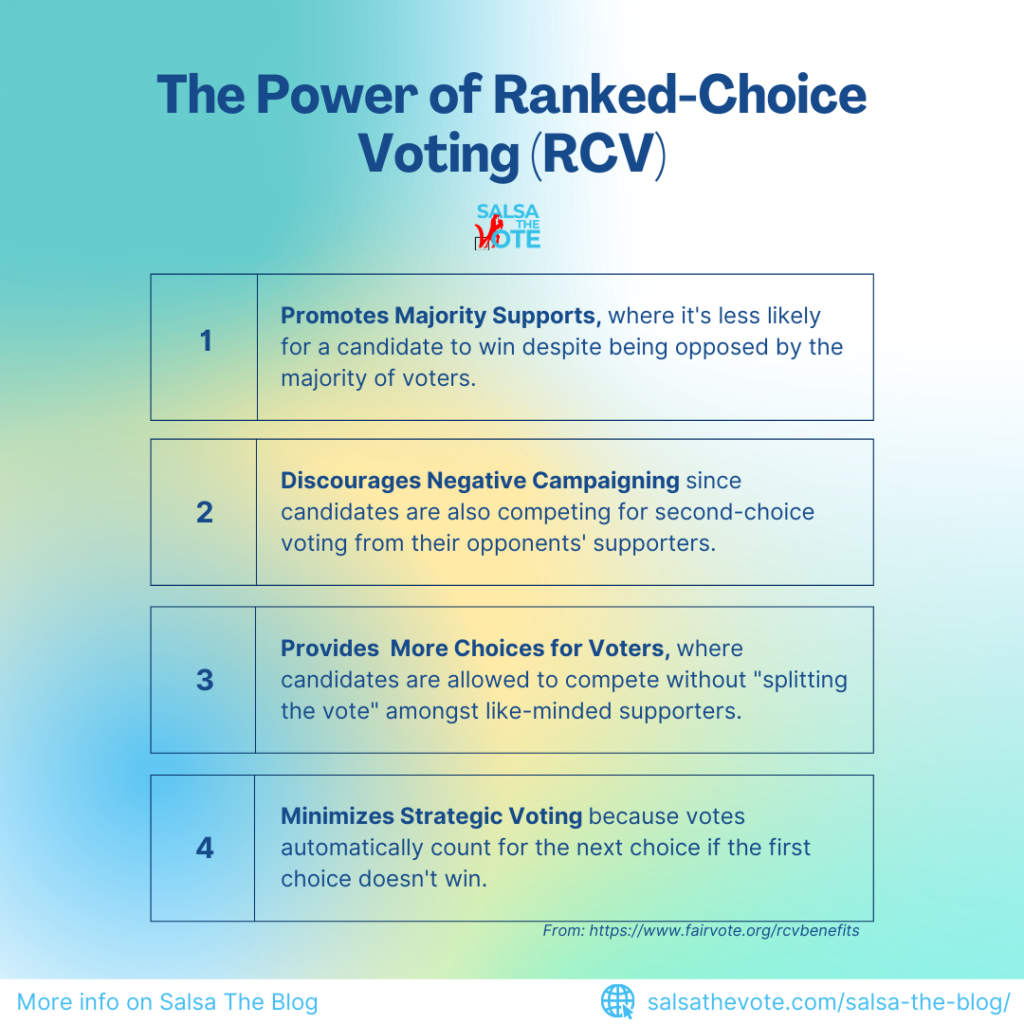 The Primary Elections in New York City are coming quickly, and many of us are still confused about the voting process, especially when it comes to ranked-choice voting. It’s fairly simple how it works, instead of choosing one candidate to support, you get to rank up to 5 candidates who have your support.

So, What’s So Good About Ranked-Choice Voting, Anyway?

This new shift in NYC’s voting process gives more power to the people by letting them have a say in who wins if their first choice does not win. This is known as majority support. RCV promotes majority support “if no candidate has a majority in first-choice, the candidates in the last place will be eliminated one-by-one. If a voter’s first choice is eliminated, their vote instantly goes to their second choice” [1]. This enables candidates with majority support to win, and not those opposed by the majority (with voter suppression aside, of course). Because voters have the option to vote for 5 candidates at most, this gives us a say in who wins because our votes do not become disregarded if our #1 does not win. So the more you rank, the more likely your opinion will be heard.

As a result, it gives us more options as voters to have support for multiple candidates instead of fully committing to one candidate who may not have all the qualities you stand for. This is especially important for us because it does not pressure us into voting for “one of the lesser evils” in some cases, and instead puts part of your support into different candidates who represent your ideals. This prevents vote-splitting from occurring, where candidates win with very little support since ranked-choice voting prioritizes the majority support of a candidate over the number of votes in favor. This blocking of vote-splitting with RCV not only helps the voters but as well as the candidates in the race, especially those of color. In elections without RCV, efforts are taken to avoid vote-splitting from occurring, mostly when it comes to several like-minded candidates running in the same race. “Candidates are sometimes pressured to stay out of the race for fear of splitting the vote with another similar candidate. This can be particularly true for candidates from groups underrepresented in elected offices, such as people of color and women” [1] With RCV, this fear of suppression is less likely to occur, and candidates are free to compete amongst like-minded individuals!

It’s a win-win! Ranked-choice voting “makes the process of determining a winner more complicated, the most important advantage of this approach, according to its proponents, is that it leads to better results” [2]. More say to our opinions and more power to our people.

For this year’s primaries in NYC, not all races include RCV. Those with RCV this year include Mayor, Public Advocate, Comptroller, Borough President, and City Council elections. Unfortunately, this year’s Manhattan District Attorney election, which may change the course of the justice system in all of NYC, is not up for RCV.

While RCV does have its many pros, it’s still important to understand why this option is not perfect. While this choice of voting gives more say to people in who wins, voting suppression still does exist and RCV does not enable any real Democracy from occurring. “[T]here are reasons for skepticism when it comes to RCV—and not just RCV itself, but the larger notion that what is broken in American politics, and therefore what will fix it, is the procedure” [2].

So while many are appreciating the switch to ranked-choice voting amongst such important primary elections this month in NYC, let’s not forget the flaws that exist within the system in general. One thing is for sure, we must keep voting until our demands and communities are heard.

So to mi nuevayorquinos, do not forget to vote this June 22, as it will be a very important election that may shift our systems in our own city for the better.